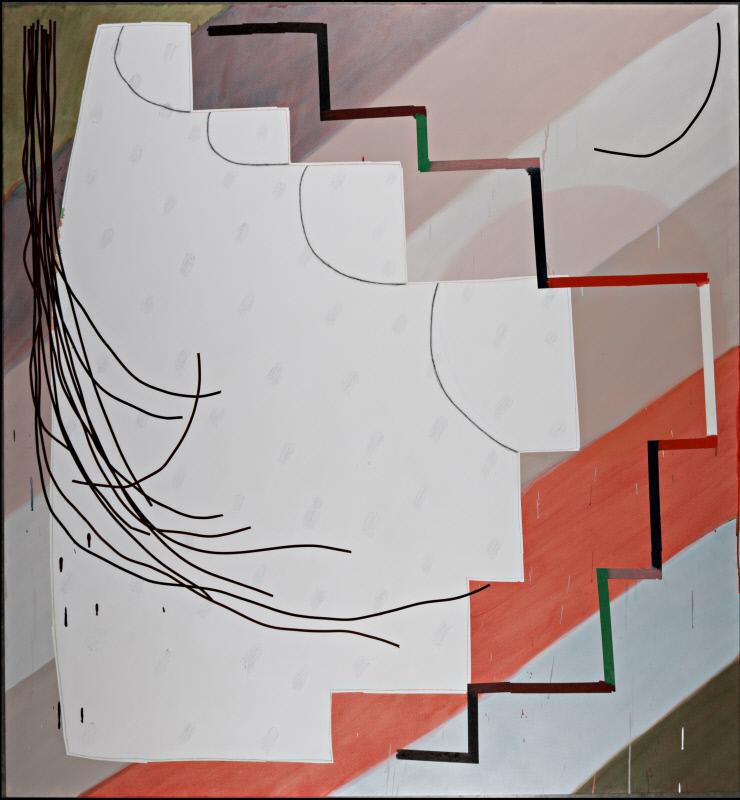 Allison Miller Snare: A toddler saw what I could not see.
Modern art often asks us to gaze at a piece with childlike wonder, a kind of naiveté devoid of preconception. It asks us to look at form and color with new eyes, seeking to elicit some kind of emotional resonance at a basic, carnal level. However, shedding oneself of preconception is a difficult task indeed. For example, when we look at a line, we see just that: a line. This line becomes a form defined by our histories and our linguistic determinations; the same occurs with all manner of shapes and figures. Our minds instantly create these connections which concretize the abstractions before us.

Therefore, what happens when a child views this piece of abstract art, made of jumbled geometries and collaged colors? What does a child of two years see when confronted with this massive canvas? What happens in this child’s mind, a mind unable to formulate words? Can this child appreciate art?

I would like to share a story here which can perhaps answer these questions, and which greatly affected how I view art.

A mother was wandering through a gallery with her two children; one, age ten, walked apart from her mother while the other, age two, was carried in his mother’s arms. The two-year-old was glued to his iPhone, playing a simple game which lit up with brilliant colors and spewed loud music. As the older child marched away to look at some art, the younger suddenly glanced up from his mobile device and stared at Allison Miller’s Snare with utmost interest. He began pointing, intently jutting his small hand outwards towards the piece. His mother asked, “Do you like this piece?” in a soft and playful tone. His lack of language skills precluded any verbalization, yet his insistent pointing hand seemed to shout his answer. I walked over, interested by this young child’s interest. I found that his hand was not simply pointing; rather, he was forming a right angle with his pointer-finger and thumb. He lined this right angle up with the painting, mirroring the jagged edges of intersecting lines which filled the piece. I pointed at one of these angles and asked, “Is this what you’re looking at?” The child shook his head vehemently, his hand still raised in the aforementioned position. For the next minute I pointed at and traced every single line in Snare. But still he shook his head, his hand still raised.

Just as suddenly as he had glanced upwards, his attention returned to his game—the loud noises once again filling the gallery. The mother smiled, “Looks like that’s that.” She walked away with her child, leaving me to stare at the painting alone.

What was he looking at?

What did he see?

How did he see it?

How did this toddler see what I could not see?

I won’t ever know the answers to my questions. No matter how long I glared at Snare, I couldn’t find what had captured the boy’s attention. What was it? Perhaps the boy had simply liked holding out his fingers, or perhaps he was overly enthusiastic in shaking his head. But I like to believe that he saw something in this piece that neither I nor anyone else will ever be able to see again. There was something in the way these two lines joined together that enraptured him. There was something. And I will never know what it was.

In this minute-long interaction, I may have learned more about art—art in its purest sense—than I had in any single lecture or class.

A toddler saw what I could not see.

A toddler saw what I could not see.

So next time you look at some piece of art, just try to place yourself in this mindset. Just try to be a child which allows the art to move you—which allows the artist’s forms to physically move your hand in reaction. A toddler saw what I could not see, but maybe, with practice, I will see just a fraction of his vision.

Cartography and Art: Artworks as Maps