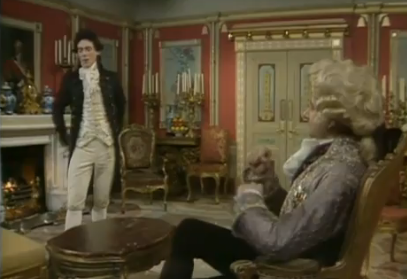 Mr. Bean? Dr. House? A satire of the Georgian era complete with the Prince Regent, William Pitt, Samuel Johnson and French Revolutionaries? Believe it or not, these are the ingredients that make up the delicious Black Adder series. Starring Rowan Atkinson (best known to Americans for Mr. Bean and his gift wrapping skills in Love Actually) and Hugh Laurie (now the star of House but previously famous for Jeeves and Wooster and A Bit of Fry and Laurie), this British comedy from 1987 is a biting but silly commentary on life in the Georgian era, focused on Edmund Blackadder, the butler of Prince George. The Black Adder series follows the Blackadder family line through British history, starting in medieval times with Edmund Plantagenet, the Black Prince. As time goes on, we see Edmund’s ancestry move down the social ranks, first as an Elizabethan lord, then butler to the Prince and lastly a World War I army captain. His wit, penchant for lengthy similes and limitless ambition, however, are continuous throughout. Atkinson is practically unrecognizable for those who have only seen him play a soft-spoken clumsy goof on Mr. Bean. Laurie too, posh British accent and all, is a shock to any House fans, as he plays the incredibly thick Prince with gusto. His fine clothes and enormous wig cover up what is actually an intellect and maturity of a six-year-old. But you grow to love the Prince despite his flaws, and you root for Blackadder to finally be rid of him. Blackadder has a servant who follows him around through the ages as well, the dirty and clueless Baldrick, the butt of many of Edmund’s caustic retorts but always on hand with a “cunning plan” in desperate times.

Rowlandson surely would have loved this series as it has the same intention as his work. It is a satire dealing with political and social issues of the time, everything from representation in the House of Commons to the Industrial Revolution, highway robbery and the Scarlet Pimpernel. Even if you know very little of the historical background, the clever script and superb acting stand for themselves. Oh, and did I mention it’s funny? These men are comedic geniuses. Come for one episode, stay for all six. You will not regret it.

The Art Center’s Georgian Film Series continues with the Black Adder (the third season) marathon this Thursday, May 5th at 5:30PM in Taylor Hall, Room 203.