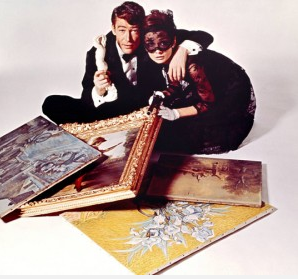 In this weekly feature, we will share our ideas for what you can do “off-campus” while the museum is closed. This week’s entry comes from Nicole M. Roylance, Coordinator of Public Education and Information.

Let me clearly state that I do not advocate theft. In particular, I do not encourage people to steal from museums. However, when Audrey Hepburn and Peter O’Toole plot to steal a sculpture in How To Steal a Million (1966), as a viewer I am not only supportive but entirely besotted with the whole enterprise. This film- with fast cars, gorgeous clothes and even more gorgeous movie stars- makes robbing a museum look like the most glamorous and romantic undertaking.

Which leads me to wonder if this film could be made today? The art world does not blink at $1 million any more. In the opening scene, the viewer watches an auction where a painting sells for $500,000. When this movie originally premiered this scene was probably more dramatic and audiences could marvel at the large sums of money being offered for a work of art. Such a sum would not merit mention in a newspaper today. So the title of the film would have to change to the far less catchy, How to Steal $106.5 Million.

In How to Steal A Million, Nicole (Audrey Hepburn) and Simon’s (Peter O’Toole) robbery is intended to prevent the world from discovering that Nicole’s famous collecting father is actually a great forger. I wonder which artist he would imitate in a remake? In this film he produces “lost” masterpieces by Van Gogh and Cellini. These are enduring names, but would he attempt a Giacometti sculpture instead? Picasso was still alive when the film was made (although his style is imitated in the opening credits), would a twenty-first century version forge a cubist canvas instead? The recent robbery and auction certainly suggest him as a worthy candidate.

While this remake remains unmade, I would encourage you to enjoy the original. It at once demonstrates the changes in the art world over the past fifty years and possesses a timeless appeal.