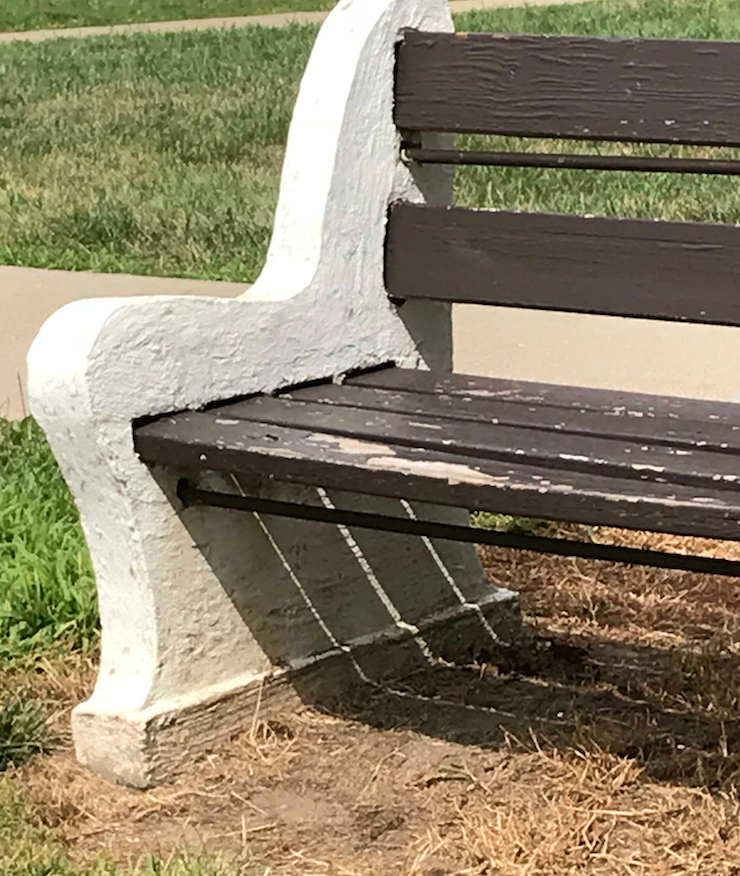 After a morning in the galleries of the Frances Lehman Loeb Art Center, I cross campus to eat lunch in the grass. I choose a place in the sun to lose the AC-chill of the museum, and slowly survey the same tree-trunks and rooftops, finding the predictability of the hour surprisingly tonic. Today, as I bisect the quad, I notice something new, or rather the thing itself isn’t new, but my noticing it is. Forming in the shadows beneath my lunch spot is Slieve Bawn, Frank Stella’s metallic abstraction which hangs in the twentieth-century gallery.

In my lifetime of concretizing the abstract, seeing creatures in clouds and faces in electrical sockets, this is the first time I’ve abstracted the concrete. The bench is split into elemental forms, one of which is Stella’s. The shadow attaches itself to the slats of the seat, the whole collapsing into two-dimensions. It is a visual field of shapes and shadows which, if only for a second, I don’t understand functionally, only visually.

We’re prone to find significance in abstraction. It’s a psychological survival tool known as pareidolia, which lets us create meaningful patterns from indistinct stimuli. It’s often whimsical to see faces and forms in inanimate objects, but it can also be limiting. Our brains produce explanations before we can enjoy the vibrant, but often anxiety inducing unknown. This is why, when I wander through the Loeb, I like to stay close to the works of Agnes Martin, Anne Truitt, Frank Stella. They’ve created worlds without footholds or synapses, in which I can rove among the obscurities they’ve constructed.

I’m not sure the three would like to be lumped together, but their works in our collection have offered me similar experiences. A mind powered by pareidolia snags on forms and faces it’s seen before, and therefore isn’t likely to be roused by the mild grid of Martin’s The Harvest, the easy tones of Truitt’s Sorcerer’s Summer, or the uncomplicated bend of Stella’s Slieve Bawn. Undemanding of their viewer, these pieces allow, rather than instigate, seeing and feeling. They are spacious and quiet, interrupting a gallery full of the suggestive and symbolic to make room for uncertain things. Stella, who famously said “what you see is what you see,” would be pleased, I think, to see the physical world dissolve into his abstraction.

Opening Night of "Nature in America"

Face to Face with Self-Taught Art