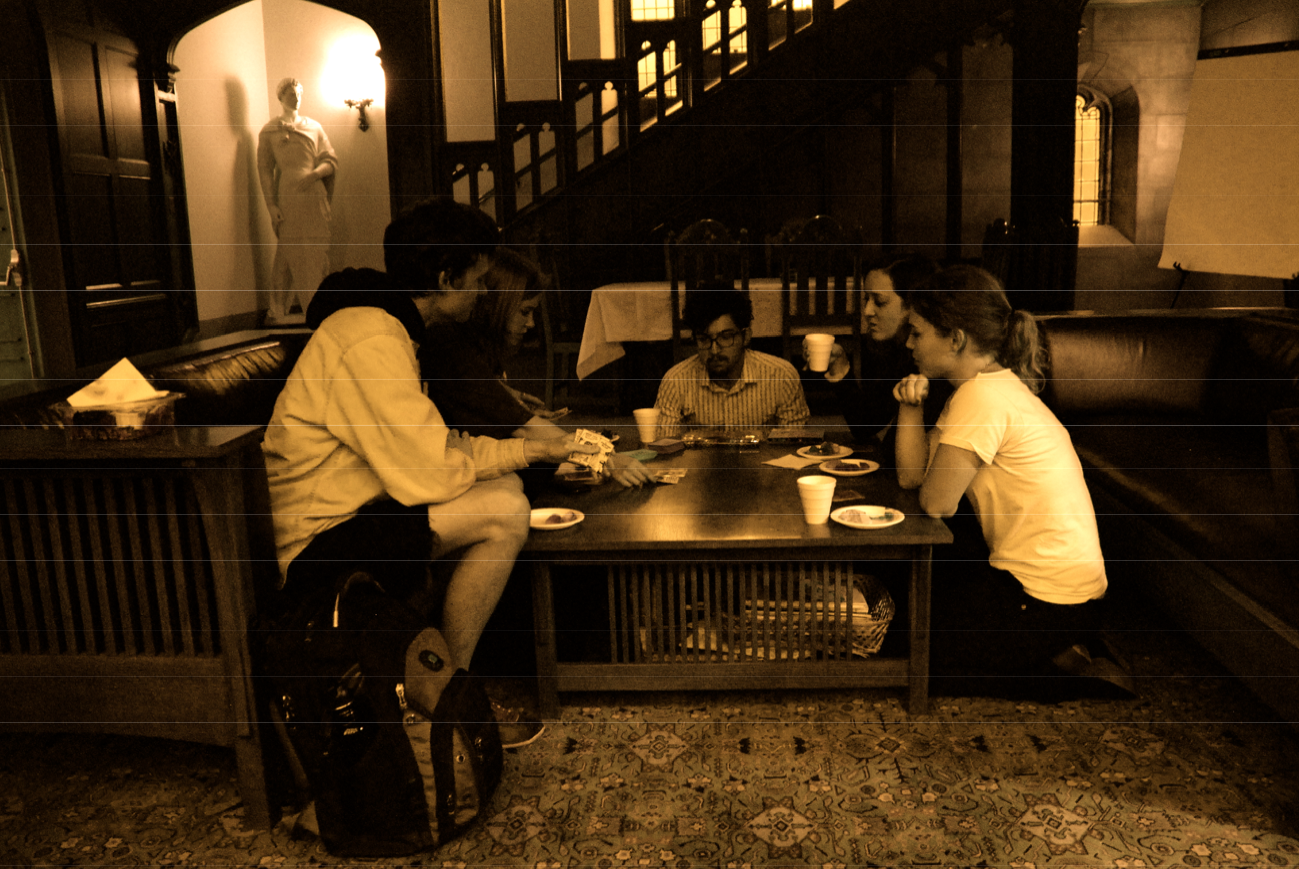 In this weekly feature, we will share our ideas for what you can do “off-campus” while the museum is closed. Today’s post comes from Annie Massa, Vassar College class of 2013 and Art Center student docent.

Tristan Tzara, a 20th-century avant-garde poet and artist, once said, “No one can escape from Dada.”  At the very least, that was true yesterday at Late Night Leaves the Lehman Loeb game night.  Among the spread of art related games we played (art history Pictionary, anyone?) was a Dada classic called Five Card Nancy.

In between contemplating the meaninglessness of art and the universe and endowing iconic portrayals of feminine beauty with facial hair, the Dadaists would get together and play this game. You can think of Five Card Nancy as a sort of pictographic mash-up of Apples to Apples and Scattergories with a dash of Duchamp.  Fortunately, it’s simple to learn and set up, and has high hilarity potential—so if you missed Late Night (and the early 1900s) don’t worry!  Here’s everything you need to know in order to create your very own game of Five Card Nancy, and do as the Dadaists did.

How to Prepare your Five Card Nancy deck:
1. First, cut up some comics.  Print comic strips from online, photocopy them from a book, or clip them from the Sunday funnies section.  Cut the comics into individual panels; each Five Card Nancy card should show only a single square panel of cartoon. You’ll want to have over five times the number of cards as people playing. When selecting panels to use, make sure you have a few wordless or onomatopoeic panels in the mix—they work well for transitions and even punch lines.

It’s worth noting that this game is called Five Card Nancy in the first place because the Dadaists used panels exclusively from Ernie Bushmiller’s comic strip Nancy.  Why?  Nancy is a comic that is so basic—in style, in language, in humor—that it’s a snap to deconstruct and rework in the context of a game.  Cartoonist and comic theorist Scott McCloud aptly summarizes Nancy’s simplicity on his blog: “A Nancy panel is an irreducible concept, an atom, and the comic strip is a molecule.  With Five Card Nancy we create new molecules out of Ernie’s atoms.”

That being said, we did not only use Nancy panels at the Art Center game night.  We drew panels from a variety of strips, including Pearls Before Swine, Agnes, Mutts, Calvin and Hobbes, and Garfield Minus Garfield, in addition to Nancy panels (Five Card Nancy without any Nancy would be a farce, after all).  The bottom line is that it’s okay to stray from the Dada paradigm and incorporate your own favorite comic strip into your Five Card Nancy deck.

2. If you want to make your cards especially durable, mount the panels on cardstock and laminate them.

How to Play Five Card Nancy:
1. You’ll need three or more players.  Shuffle your deck and deal five individual panel cards face down to each player. Flip up the top card from the remaining pile, and put it in the center of the table.  That card is Panel One.  Place extra cards in a pile off to the side.

2. Choose someone to go first.  This person selects a panel from his/her hand that will best build upon Panel One.  The other players take a vote (thumbs-up or thumbs-down) to determine whether or not the added panel is a good follow-up to Panel One.

Disclaimer: “good” does not have to mean logical.  You are not trying to recreate the comic strip as it originally appeared.   A “good” next panel might be funny, or it might just open up potential for a great punch line.  It might be completely out of left field, or so-bad-it’s-good.
If the player’s panel is voted in, it stays in the center of the table next to Panel One and becomes Panel Two.  If it’s voted out, the player sheepishly returns it to his/her hand.

3. Play moves clockwise.  If during a turn a player feels that his/her hand has no adequate next panel, it is acceptable to pass a turn.  To pass a turn, a player takes one of the panels from his/her hand, puts it at the bottom of the face-down pile of extra cards, and draws a new one from the top.

4. When a player puts down a card that seems to conclude the strip well (again, “well” is totally subjective), players take a vote either to end the strip there and begin a new one, or to continue taking turns building on the strip.

The first player to get rid of all his/her cards wins!  You might go through multiple strips before you have a winner.

For the more low-maintenance gamers, Five Card Nancy solitaire is available online, too.

Rural Landscape goes to the Whitney

Fantasy in the Subway: The Work of Squire J. Vickers