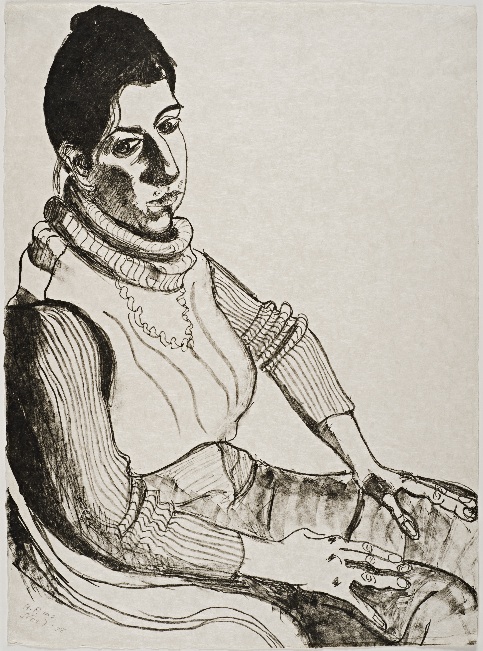 In 2011, the Frances Lehman Loeb Art Center acquired a lithograph by artist Alice Neel from Drs. Lenore Levine Weseley and Alvin C. Weseley. The work is a portrait titled Judith Solodkin and was printed and published in 1978.

Alice Neel (1900–1984) was an American artist well known for her portraits of friends, lovers, and colleagues. While she is most famous for her oils on canvas, she often broke away from this medium in favor of drawing and printmaking. The themes in her work tended to follow the patterns of her own life. When she gave birth to her daughter, she created images featuring maternity wards, women caring for their children, and the toils of motherhood. Later, when she moved to East Harlem, she painted images of her neighbors, particularly women and children.

Toward the end of the 1960s, Neel’s work came to have more political themes and became better regarded and respected by the art world than it had been earlier in her career. By the 1970s, she had become an icon for feminists, focusing on portraits of the important or high-achieving women around her in New York City. The work recently acquired falls into Neel’s 1970s feminist period.

The portrait depicts Judith Solodkin, a well-known lithography printer. Solodkin appealed to Neel as a subject as she was the first woman to graduate from the Tamarind Institute, a lithography workshop and division of the University of New Mexico, as a Master Lithographer, and had founded her own print studio in 1975. She also printed and published this very print.

The portrait positions Solodkin sitting at a three-quarter position to us. A strong light source coming from off the page bathes parts of her head in light but leaves deep shadows that fall across her nose and right cheek. Her face is turned slightly and her eyes are focused on something we can’t see. She also sits awkwardly, with her arms bent outward and her hands turned inward. She seems ready to spring up at a moment’s notice and attend to whatever is holding her attention, suggestive of Solodkin’s unabating energy and hard work.

Solodkin’s hands are illuminated, left entirely white, in stark contrast with the dark pants beneath them. The lines of her sweater also draw our eyes down her arms and concentrate our attention on her hands. Perhaps this is a nod to the manual ability and accomplishments of the subject.
Another interesting way that Neel references the artistic achievements of her subject is with the process through which she created the work: the portrait is a lithograph, Solodkin’s own medium of choice. Neel’s use of lithography implicitly honors Solodkin’s skill and artistry in this medium.
In this print, Neel is subtly championing the accomplishments and skills of a fellow female artist in a rather simply composed and rendered portrait.