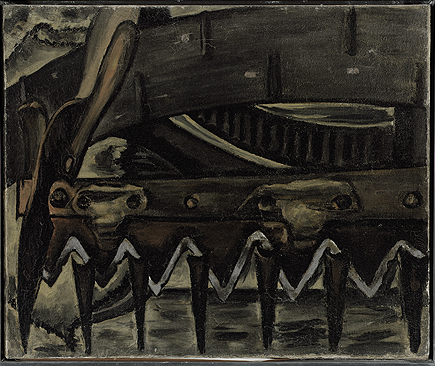 In its dark palette of brown, black, and metallic gray, Arthur Dove’s “Machinery” (1921) rarely catches my attention when I walk around the galleries in the Frances Lehman Loeb Art Center. Yet, Dove’s approach to modernism is strikingly different from the contemporaries to it in our collection. Integrating cubist and expressionist influences within a unique use of perspective, Dove produces a style that is one of the earliest precursors to and inspirers of abstract expressionism.

“Machinery” is a still life of agricultural machinery, a subject Dove used for a series of works in the 1920s during the time he lived on a farm in Westport, Connecticut, (including “Hand Sewing Machine,” now part of the collection of the Museum of Modern Art, and “Gear” of the Whitney Museum). At first glance, the work presents to me an interesting juxtaposition of jagged and rounded forms that seem to be inspired by various parts of machinery. The bottom third of the composition contains a series of shark-tooth-shaped figures and against what looks like the edge of a saw. Above these, the backbone of the saw spans the width of the pictorial space and has several bolt-like forms along it. The upper-half of the work has two circular forms, facing towards each other, with patterning along their curves. Yet, Dove does not orient these forms around a single point of perspective; instead, he brings them forward to the edge of the pictorial plane. This, in effect, obscures the forms’ coalescing into the representation of an object of machinery, as if Dove wants to bring into focus the detail of the machinery’s material in its basic geometric shapes.  When I step closer to the work, I see the irregularity of his brushstrokes in his work’s the thickly-coated surface. Glistening graphite stroke have a fibrous texture; many coats of brown washes reveal Dove’s horizontal motion in creating the saw’s backbone; short, thick lines of black are like embossed gashes. Ultimately, through this brushwork Dove also seems to expose the material detail of his artistic medium.  In the end, Dove does not seem to reconstruct a machine in his work; instead “Machinery” seems to be about the abstract essence of the machine in its strange geometry and the essence of Dove’s creation of these forms through his expressive brushwork.

Note: Since this article was written, historical information about this work has been presented to the art center. Evidence has indicated that the proper orientation of Dove’s Machinery is that of the image to the left (or the image above rotated 90 degrees clockwise) The work’s presentation in the gallery has been corrected to accommodate for this.
Posted on Oct 5, 2012

In Focus: Autumn in North America

Fantasy and Reality in Natatorium Undine