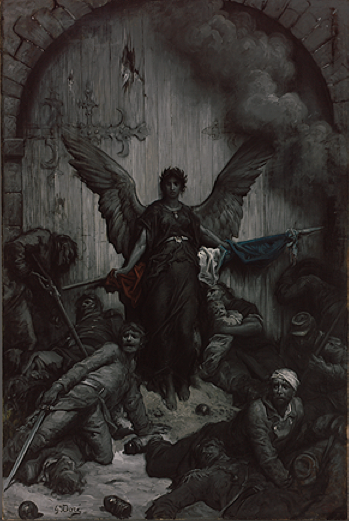 The Defense of Paris by Gustave Doré is one of three large canvas inspired by Prussian occupation of Paris in the winter of 1870/71. Surrounded by wounded and perishing French soldiers, the female in the center of the composition holds a French flag with colors that shine like a beacon among the monochrome battle scene. Doré has chosen her to represent French liberty and uses her to present freedom to the viewer as weathering the hardship of war in her grounded stance in the midst of massacre.  With a crown of laurels encircling her head and wings spread behind her, she is like a heroic angel. Moreover, she reminds me of the Statue of Liberty and Marianne, the Lady Liberty of the French Republic. Indeed, these female figures share a common heritage, for all were taken after the image of Libertas, the Roman goddess of freedom.

Libertas was elevated from a deity to a goddess just before the Second Punic War in the 3rd century B.C.  During the Roman Republic, three temples were constructed in her honor, and a small statue of her was erected in the Roman Forum in recognition of Julius Caesar.  Libertas was also featured on currency in the Roman Empire, such as Denarius, a small silver coin circulated in the first century B.C, and the “Freedom of the People” coins during the reign of Galba in the first century A.D.

Much like the female figure in The Defense of Paris, Libertas was frequently depicted as a figure wearing a wreath or crown and occasionally bearing wings. In full-length images Libertas typically was draped in robes or wore a simple gown, which Doré’s female’s dress loosely resembles in her empire-waisted, flowing dress. Also in these full-length images Libertas typically was rendered as upright and holding a traditional spear symbolic of her readiness to defeat tyranny; Doré’s female bears a flag behind her, symbolic of her stead-fast allegiance to France. In the end, Doré’s use of the classical model of Libertas suggests French ideals of liberty as modeled after the ideas of freedom that led Rome through its golden age.

Stella in the Sculpture Garden

Playing with Space: Gordon Matta-Clark at Vassar and Beyond