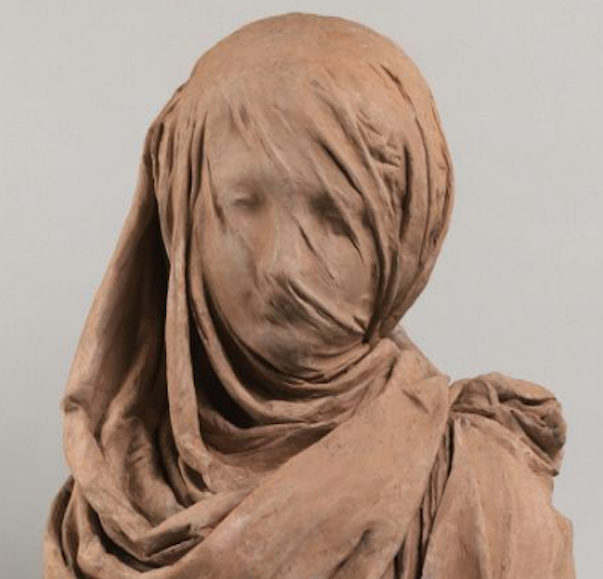 The question I was most frequently asked while giving tours this summer was “Can you tell us about the bust of the woman with the veil?”  Now, after some research, I can. Located in the middle of the floor of the nineteenth century gallery, Veiled Woman by Albert-Ernst Carrier-Belleuse is an absolutely captivating piece: a terracotta bust of a mysterious woman, her features partly obscured. The piece is an incredible tour de force, showcasing Carrier-Belleuse’s mastery of the medium and understanding of form. He used the traditional reference to funeral motif, but adapted the Baroque style to add energy and drama to a typically static, Classical style. His use of the Baroque style was revolutionary, as the work is intended to be viewed from multiple angles, unlike the Classical style.

The artistic community did not recognize Carrier-Belleuse as a serious sculptor until the Salon of 1857, after emperor Napoleon III purchased Carrier-Belleuse’s nude Bacchante.  Previously, Carrier-Belleuse worked in the 1840’s making statuettes for commercial manufacturers, and in 1850 he began working for Minton China Works.  From this humble beginning, Carrier-Belleuse developed as a sophisticated sculptor, becoming one of the founding members of the Société Nationale des Beaux-Arts.
The Veiled Woman captivates audiences.  Today a visitor remarked to me how unsettling she found it; that the ambiguity of the veil and the face became discomforting up close, yet the piece read as realistic from further away.  The cascade of the veil over the woman’s face both obscures her from view, and accentuates her visible features. Each angle offers a completely different perspective of the woman; at some angles the veil beclouds her expression, while in others her grief shines through.  This heightens the woman’s mystery while also playing off the traditional motif of a woman in mourning.

The woman beyond the veil remains unreachable.  She is a distant, fantastical figure shrouded by enigma that can never be completely solved.  We can only hope for a greater appreciation of the Veiled Women through an understanding of her creator and the sentiments she embodies.

Behind Closed Doors: Celebrating the Old with the New