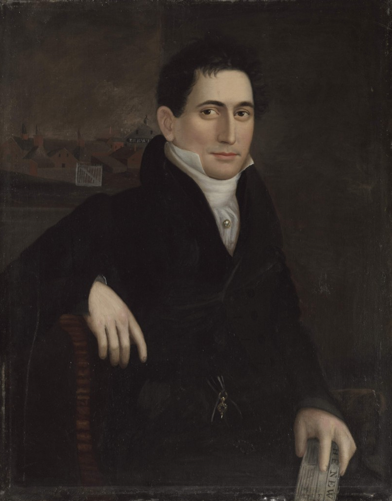 Along with Vassar College, the Art Center is celebrating the sesquicentennial anniversary of our founding. In this weekly feature, we will look back on the rich 150-year history of the collection. Today’s post comes from Nicole M. Roylance, Coordinator of Public Education and Information.

When I think of Matthew Vassar, I think of the distinguished figure depicted in Charles Loring Elliot’s imposing portrait (currently on view in the Art Center atrium). This image of Matthew Vassar, standing proudly on an imagined balcony pointing proudly at the college he devoted all of his time and resources to building, is so striking and has become so ubiquitous it is difficult to imagine the man any other way.
However, Matthew Vassar was not always the gray-haired figure immortalized by Elliot. Vassar was young once. In fact, in this portrait by an unknown artist, we find Vassar was not only young but, dare I say it, dashing. The portrait was commissioned by Vassar most likely between 1820 and 1830. Vassar’s brewing business was flourishing and he was also purchasing patents and real estate. Vassar’s success as a businessman is alluded to in the portrait with a view of his brewery in the background. Vassar also wears a pearl stick pin and a gold watch fob as symbols of his wealth.

The portrait was most likely executed by one of the itinerant painters travelling through the area. Vassar could have afforded to travel to New York City to commission a more well-known and more expensive portrait painted. Vassar’s choice of artist reveals that he did not want to appear too pretentious to others in the Poughkeepsie community. The painting depicts Vassar as a young man who is looking out at the viewer and his own future with confidence.

Sacrificing the Ego in Prints from “In Translation”