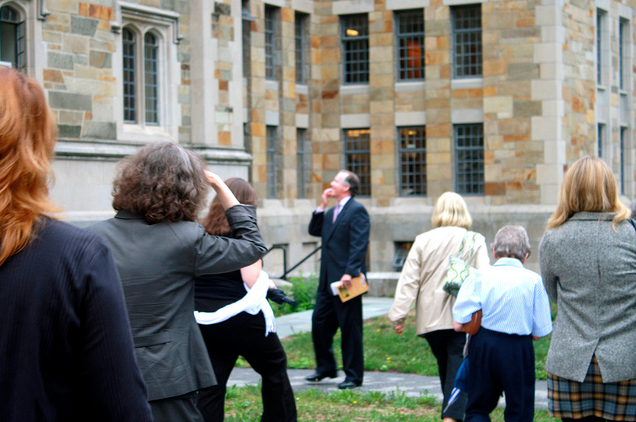 Walking through the main entrance to Vassar College is something that we students do with considerable frequency, yet how many of us have paused to tilt our heads ever so slightly to take a closer look at the figures that gaze down on us? I, for one, had not given much thought to these fascinating gothic revival sculptures on the exterior of Taylor Hall, the home of the Art History department and Art Library here at Vassar, that is until this Tuesday when James Mundy, the Anne Hendricks Bass Director of the Frances Lehman Loeb Art Center spoke about them as a part of the ongoing lecture series, Insights On Site. The building was made possible by the Pratt family and in 1915 it was dedicated to President James Monroe Taylor. However, the extent of the information Mr. Mundy shared with us extends far beyond the sort of fact and figures one might come by on the Vassar Encyclopedia. His main question revolved around the unlikely characters that were mixed in with more traditional art historical personalities. Mundy explained that the figures lining the side of Taylor Hall facing Raymond Avenue where representatives of the fine arts: Dürer for printmaking, Raphael for painting, Michelangelo for sculpture, and, curiously enough, Augustus Pugin for architecture. Now Pugin was a prominent architect, of course, but hardly the paragon of his time. Mundy suggested that perhaps it was because Pugin was a major figure in gothic revival architecture and was an idol of the architects on this project, Alan and Collins, that he was included; however, at the end of Mr. Mundy’s talk Nicholas Adams, The Mary Conover Mellon Professor in the History of Architecture (who will be leading Insights on Sight next week) suggested that perhaps the selection was made due to the religious affiliations of the Pratt family. A Miscellany News article from 1915 confirmed that Mr. Pratt was, in fact, highly involved with the construction process. So, while both solutions are possible, the truth remains a mystery.

While the front of Taylor Hall is lined with guardians of the fine arts, the backsides that face the entrance of the Art Center, and the side open to the sculpture garden are lined with those of the applied arts.  Here, you will find Cellini, Wedgwood, and St. Gaudens representing the plastic arts, while Guttenberg, Jaquard, and the mysterious Flavius reside over the sculpture garden, representing the technical arts. Although the identity of Flavius eluded Mr. Mundy for some time, eventually—as sneaky facts often do for the persistent detective—it came to light. In volume twelve of the eleventh edition of the Encyclopedia Britannica our ghostly Flavius receives mention. As it happens, he was the first recorded Venetian glass blower. Published in 1910 and 1911, just a few years before the dedication of the building, the Encyclopedia Britannica was regarded as one of the most sophisticated reference tools of the time. It is likely that his brief mention was enough to get him onto Taylor Hall with other archetypal technical artists.

Mr. Mundy’s insight uncovered many mysteries about the building many of us frequent and brushed the dust off others. It was a captivating exploration of both resolved and enigmatic questions that will keep my head tilted back when I encounter other museums or public libraries with similar figures staring down, guarding their collections.

Kaleidoscope: Many Lenses for Rothko

The Power of the Comic Form