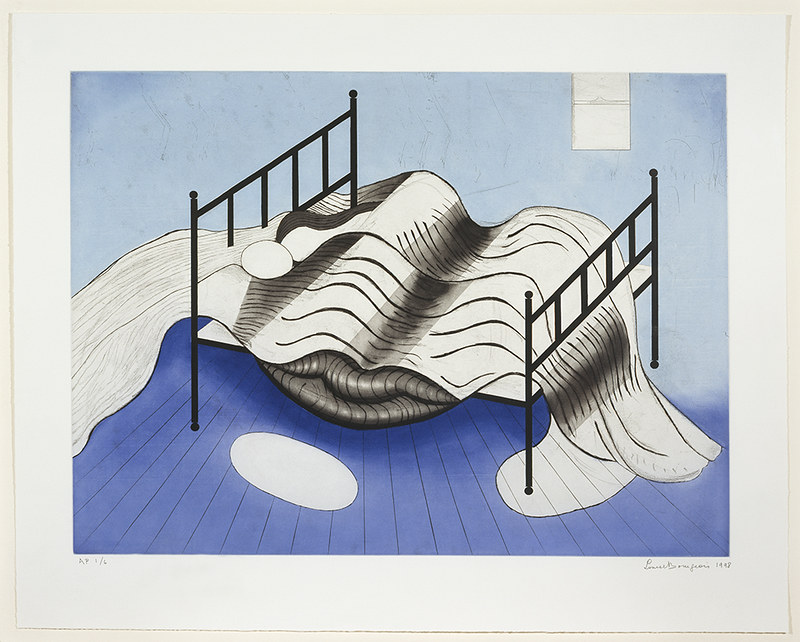 The Art Center’s popular exhibition Louise Bourgeois: Ode to Forgetting, From the Collections of Jordan D. Schnitzer and His Family Foundation had its opening lecture last Saturday, February 8. The speaker was the esteemed American art critic Donald Kuspit, winner of the prestigious Frank Jewett Mather Award for Distinction in Art Criticism. He has formal training in psychoanalysis and has received a PhD in philosophy and a PhD in art history. His lecture titled “The Benefit of Art According to Louise Bourgeois: ‘Art Is a Guarantee of Sanity’” delved into the psyche of Louis Bourgeois, an artist whom Kuspit has long studied and whom he personally interviewed.

Kuspit first described himself as an admirer of Bourgeois’s art and characterized her as an extraordinary yet disturbed person. He began by discussing the artist’s animosity towards her body and drew some comparison between the fragmentation of bodies in Picasso’s Les Demoiselles d’Avignon (1907) and Bourgeois’s work. He interpreted Bourgeois’s Maison Fragiles (1978) as representing a hollow woman. The thin metallic structure, according to Kupsit, is a house with no soul, a reduction of the female body to a shell devoid of self, a body stripped of curves. Bourgeois, in Kuspit’s view, felt profoundly ambivalent about being a woman; Kuspit described what he termed her “penis envy,” explaining that she sought both the pleasure and social standing that she understood to be the reward of possessing a penis.

During her life, Bourgeois was emotionally and artistically influenced by her experiences as a woman: she struggled to accept the roles ascribed to her gender and with coming to terms with her father’s affair with her childhood governess. Her mother, Joséphine, passed away in 1932 when Bourgeois was 21 years old. The artist reacted with an incredible shame and guilt and attempted suicide, something the lecturer related to “object relations” theory. Following this event she abandoned her studies of mathematics and turned from the objectivity of science to the subjectivity of art, an area in which she had more freedom of expression. In her diary she wrote, “To be an artist is a guarantee to your fellow humans that the wear and tear of living will not let you become a murderer.” In addition to her artistic practice, Louise Bourgeois underwent psychoanalysis for three decades. Though she famously said that ‘art is a guarantee of sanity,’ Kuspit argued that it was the psychoanalysis rather than her art that allowed her to restore her sense of self. However, Louise Bourgeois writes, ‘The truth is that Freud did nothing for artists, or for the artist’s problem, the artist’s torment.’ She continues, ‘to be an artist involves some suffering. That’s why artists repeat themselves – because they have no access to a cure.’ This self-awareness seems to negate Kuspit’s claim.

After examining multiple works that included the motif of the breast, such as The Feeding (2007), Maman (2008) and Mamelles (1991), Kuspit offered the conclusion that Bourgeois’s art is comparable to that of a child and related this to Freud’s idea that mental illness is a regression to childhood.
During the Q&A, some audience members expressed reservations about Kuspit’s interpretations of Bourgeois’s art. One audience member wanted to know more about the role of humor in Bourgeois’s art, feeling that the artist may have had more self-awareness than the picture that Kuspit painted of her. Another person criticized the apparent double standard of Kuspit likening Bourgeois’s art to that of a child when the same was not said of Picasso. Drawing a comparison between the emotional state of female artists and children does not seem like an appropriate response to the legacy of Bourgeois’s art. Someone else hypothesized that rather than being controlled by her pain, Bourgeois, as a member of an oppressed group, used her art to take what caused her pain and take ownership of it. One Bourgeois fan whom I recently gave a tour to and who attended Kuspit’s lecture felt his talk was the “antithesis” of the exhibition, calling Bourgeois’s work sensitive and feminine, rather than angry. The varying responses to Bourgeois’s work suggest its continuing emotional power, as well as the ambiguity surrounding her personal and artistic legacy.
The show will be up until the 5th of April so we invite you to come see for yourself what you make of the works!

The Installation Process of "Universal Collection: A Mark Dion Project"