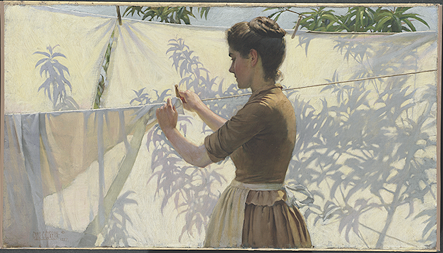 Charles Courtney Curran’s Shadow Decoration (1887) is one of the most recognizable works in our collection. This image of an ordinary woman doing her daily work at the laundry line has developed quite a fan-base over time. Visitors often purchase postcards, posters and notebooks featuring the painting at our entrance kiosk to serve as mementos of their visit to our galleries. What is it about this painting that appeals to so many? Certainly it is beautiful: the sunlight creates intricate shadows on the sheet, illuminating a scene from everyday life that is recognizable and relatable. The “everywoman” figure is partially turned from us, and the artist obscures her full expression, adding ambiguity to the tone of the scene.

The devastating effect of the Civil War caused the rise of genre paintings like this one that showed common people performing everyday activities. With a decrease in American nationalist feeling, people were not as interested in the sublimity of nature or the grandiosity of American history as they were in seeing scenes of ordinary life. This native disillusionment also provoked a quest to find similarities that America still had with Europe. Not, “Go west, young man,” but rather, “Go back whence you came.” What Curran does so skillfully here is marry the style of French impressionism (that is also influenced by Japanese woodblock prints) with the subject of American genre painting.1

While the woman in Shadow Decoration does not have any known identity, we can speculate about aspects from her life by looking at this painting. She could be working in domestic service, one of the few suitable occupations for a woman in the nineteenth century, or she could be doing her own laundry, one of the chores that defined the everyday life of a wife and mother in this era. If this were a typical depiction of a nineteenth-century woman of leisure, she might be wearing a frilly dress with lace, with a parasol to shield her skin from the elements. Instead this woman’s face is slightly blushed, her head, neck, and forearms exposed to the sun’s hot rays.

The French Impressionists often used the female form as a decorative instrument, a prop for the artist to place in a scene and a placeholder, rather than an individual, used to complement the light or the setting that the artist chose. Similarly in the Curran painting, the beauty of the shadows on the sheet upstages the woman; even the tree in the background, playfully peeking over the clothesline, distracts our attention from the laundress.
The vision of this woman in this idyllic atmosphere is easy to romanticize, though the struggles faced by lower-class women of this period, once considered, are hard to forget. Any underlying emotions of frustration, sorrow, or perhaps contentment are lost in the facial expression hidden from us.

So, who—or what— is the real subject here, the woman or the shadows?

—
[1] One critic said of Curran: “Anyone knowing him could discover in his work qualities redolent of two worlds, Ohio and Paris. His scenes are taken from the woodland of the old Buckeye State, lightened by a refinement and delicacy of technique gathered from the best French masters.” Cited in Margarita Karasoulas’s biography of Curran, http://www.questroyalfineart.com/artist/charles-courtney-curran
Tags: Charles Courtney Curran