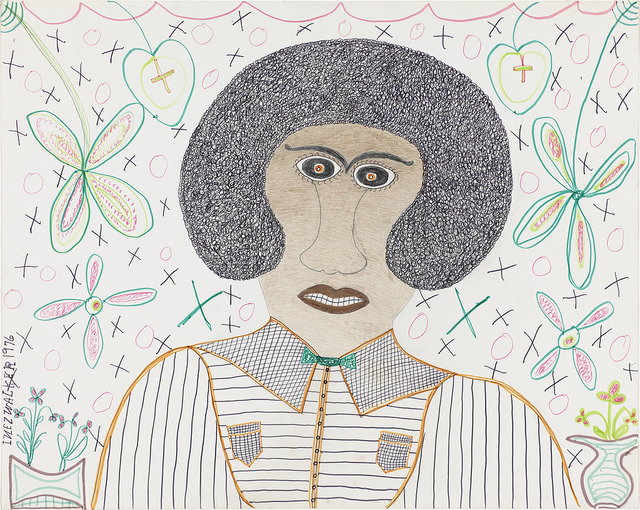 The Loeb opened its first major exhibition of the 2019 calendar year on Friday, February 1, with Freehand: Drawings by Inez Nathaniel Walker. Exhibition curator Mary-Kay Lombino commenced the night with a lecture encompassing the artist’s unconventional entrance into the art world, including the Vassar alumna who helped her get there.

Lombino began her talk with an idea meant to challenge our notions about how art comes to be called “fine.” She explained an intangible yet crucial aspect to having one’s art revered in formal spaces: privilege.

Walker hadn’t had the opportunity to attend art classes or study art history; she had grown up in a poor, rural area of South Carolina and her education was limited to about the seventh or eighth grade. She had lived a life of hard work, primarily as a migrant agricultural laborer and sometimes as a domestic worker. On the other hand, Pat O’Brien Parsons, class of ‘51, could use her socioeconomic and college-educated privilege for appreciating and collecting art like Walker’s that was otherwise unrepresented at auction or in galleries.

The lecture delved into Parsons’s unique personality as an art dealer and offered a window into the symbiotic relationship she would soon develop with Walker. Lombino recalled her fond memories of Parsons’s eccentric spirit. Her innate curiosity for the imperfect and the unknown gave Parsons an obsession with what many call “outsider art.” This began her vast collection of portraits penned by self-taught artists.

Walker’s relationship to Parsons began when she was incarcerated at a Westchester County prison for killing a man who had abused her. To avoid the “bad girls” in the facility, she took up drawing on the back of prison newsletters. The drawings may have helped her process her surroundings, and they certainly must have helped pass the time. Her teacher in remedial English, Elizabeth Bayley, discovered the drawings and brought them to the attention of Parsons who had a nearby gallery. Parsons would go on to support Walker’s talent while the artist was in prison, then on parole, and for many years after. Parsons worked to bring Walker’s artfully disproportionate portraits that seem to capture the inherently flawed essence of human nature into the gallery and into public and private collections.

Lombino spoke about Walker and Parsons’ artist-dealer relationship that later developed. The two wrote letters back and forth, some about the success of Walker’s portraits in the formal art arena. “My Dear Mrs. Pat” is how Walker would often start her letters to Parsons. Lombino conjectured that one of the artist’s full-length double portraits included both Walker and Parsons, revealing Parson’s distinctive short blond hair coupled with Walker’s earrings resembling crucifixes.

The lecture questioned whether we should study the artist’s biography in conjunction to their work. Lombino ultimately conceded that “It’s their art that endures.” However, are we to ignore the part of Walker’s life that arguably influenced her art the most? Perhaps she would not have evoked a “departure from reality” by drawing figures of unorthodox proportions if she hadn’t endured a sentence or all the hardships in her life that led up to the crime she committed.

After the lecture, attendees were welcomed to proceed into the gallery where they could experience the indescribable allure of Walker’s art. It wasn’t uncommon to see people looking at her work up close, minimizing the distance between their gaze and the repetitive detail with which Walker draws her subject’s hair. In her 1976 work entitled Frontal Man, there must be thousands of layered tiny “o’s” delineating a voluminous ’do.

There is something almost satirical about Walker’s art. A few attendees even called it “a little funny, but in a good way.” Perhaps it’s the enlarged heads coupled with shrunken hands, reflecting a warped yet pleasing perspective of human form. Many of her subjects are drawn with an oversized eye facing toward the viewer, even if the body is in profile. In Freehand, we can see people from Walker’s point of view: a little distorted, and with eyes that are always staring back.

Freehand is on view through April 14, 2019. The exhibition is supported by the Friends of the Frances Lehman Loeb Art Center Exhibition Fund and organized with the cooperation of the American Folk Art Museum, New York.

Connections: On the Street