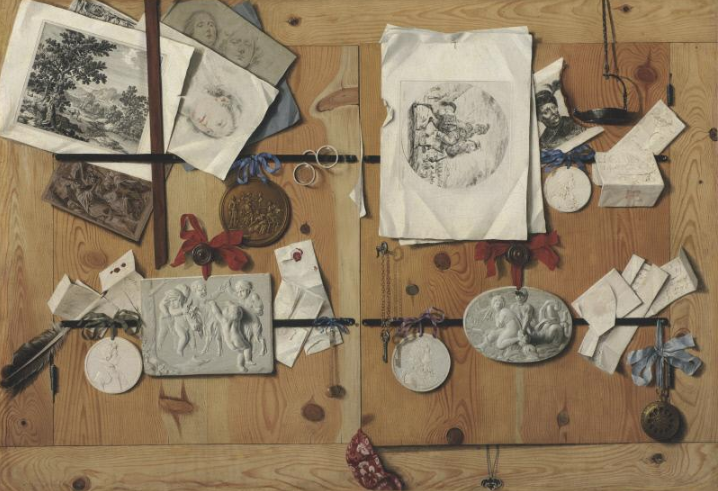 This summer, a playful new exhibition decorates the walls of the Project Gallery at the Frances Lehman Loeb Art Center. The display consists of nine works from the permanent collection that engage the theme of trompe l’oeil, or “deceive the eye.” Featured items range from photographs that seem to defy gravity and space to an uncannily three-dimensional,  larger than-life painting from 1989 by Gary Schumer based on a seventeenth-century work by Johannes Vermeer. Visitors to this gallery will not leave without a few revelations and realizations of their own regarding art, vision, and the power of deception.

As I walk around the gallery, one work always seems to catch my attention. Looking at the painting Trompe l’oeil Still-Life of a Letter Rack, attributed to Andrea Domenico Remps, my eyes and mind begin a scavenger hunt based on its imagery. Scattered throughout the work are small drawings and relief sculptures, medals, prints, plaques, and domestic objects. Painted in seventeenth-century Italy, this work is one of a group of paintings (many of them by lesser-known artists) depicting card racks and small objects set against pine cupboards. The range of different types of items represented in these cabinets of curiosity allowed artists to capture objects of particular social or cultural value, while fooling the eye – and showcasing their technical virtuosity – through fine brushwork used to create highly naturalistic renderings of three-dimensional objects.

In the Art Center’s Letter Rack, the small gold pendant bears a scene of a sculptor, scholar, and student practicing mathematics. Through close looking, one understands that the inclusion of this vignette signifies the importance of the liberal arts to the artist. Notice also how the oil lamp in the top-right corner has burned away part of the portrait, a clever feature playing into the spirit of trompe l’oeil works. An additional amusing element is the eyeglasses in the center of the painting. These glasses include variations in shadow and the bending of light as the tip of the lens hangs off the cabinet rack, resulting in not only a testament of artistic skill, but also a witty nod to the investigation that is involved in studying a trompe l’oeil work.

In the Vassar painting, there are a number of references to Florence and the Medici, a powerful banking family and political dynasty in fifteenth-century Italy. References include the appearance of prints by artists Stefano della Bella and Jacques Callot, both of whom worked for the Medici, as well as the medallion in the lower left depicting Francesco de’ Medici (1614–1634), who died of disease at the age of twenty fighting in the Thirty Years’ War. The other medallions portray Louis XIV of France (1638–1715), the grandson of Marie de’ Medici and Cosimo III de’ Medici (1642–1723). The Medici family would have commissioned for themselves bronze medals and ornaments  resembling classical Roman coins, objects meant to signify their elite status and wealth. An additional nod to the Medici family is seen at lower center with the inclusion of a seventeenth-century thermometer, a tool reportedly invented by Ferdinand II de’ Medici.

The longer one looks at Trompe l’oeil Still-Life of a Letter Rack, the more aspects that involve wit and deception can be found, until the painting becomes a invitation for viewers to contemplate if seeing really is believing.

Off-Campus: What You Can Learn from Mummy