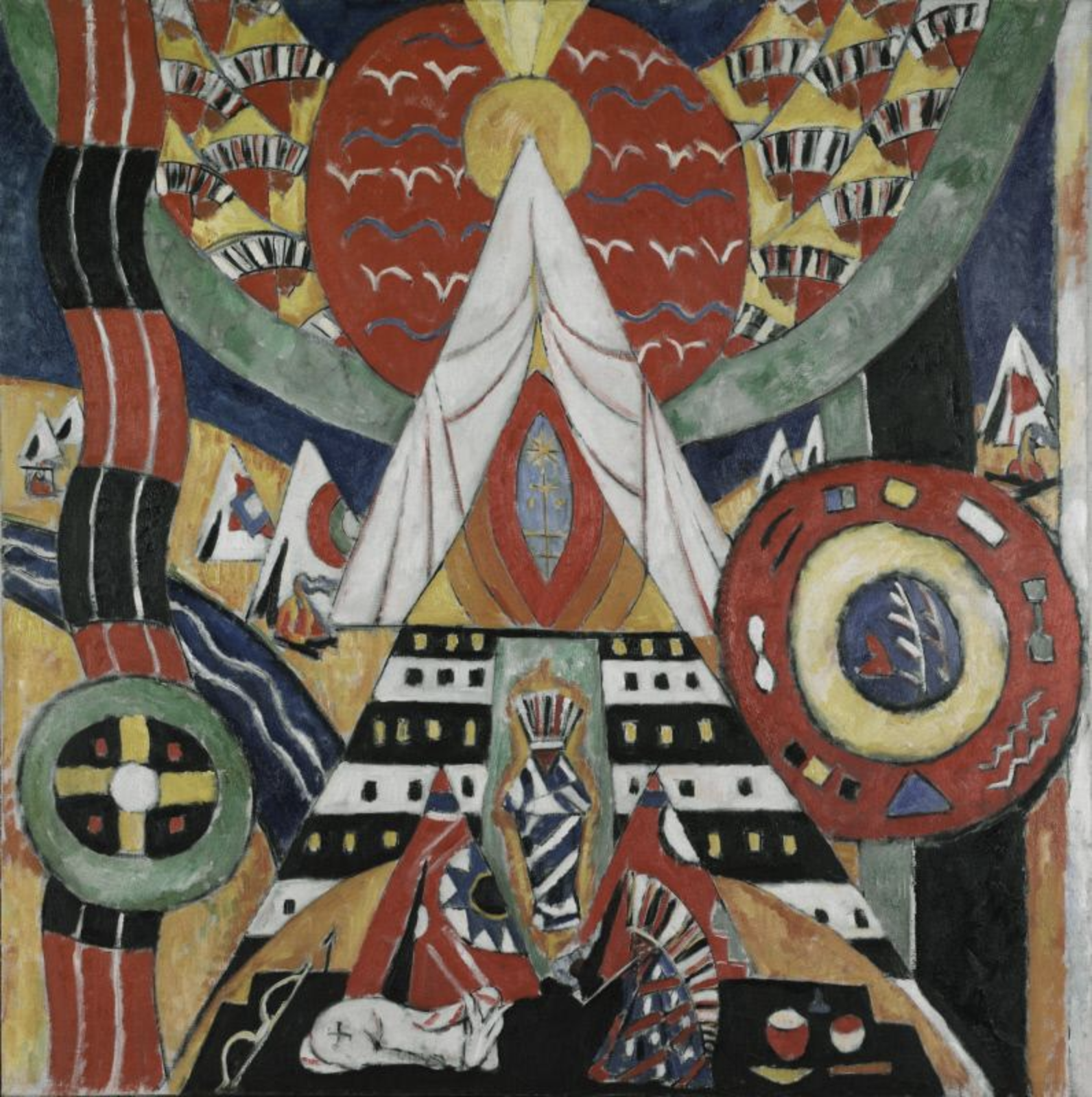 As a Vassar student, I continually strive to make interdisciplinary connections, between my classes, my job, and my hobbies. I have learned over my years here that all disciplines can be (and likely are) linked together, and I love exploring that through my work as a student docent at the Loeb. This semester, a cartography class I am taking has opened my eyes to the close relationship between art and maps, both throughout history and in current times. I have been exploring these connections using the Loeb’s collection, and in this blog post I want to discuss some of the similarities between the two genres and then describe how looking at one work of art through the lens of cartography has revealed beauty and details I previously overlooked.

First, we can think about how we look at maps in cartography. They are often viewed as whole objects that provide an overview of some area of significance, and that also illustrate details for navigation and further understanding. Some items are present on most maps, but change with the era or style: a compass rose, used to depict angles at sea; a scale bar, to determine distance; a north arrow, to point to true north; and attribution of maker and authority, usually set within a cartouche. Parallels within artworks include attributions of maker in the way of signatures (sometimes set within a cartouche or other enclosure), motifs that help the viewer understand the purpose or meaning of the work, and compositional strategies that direct the eye in an intentional path.

For example, let’s look with a mapmaking lens at the painting Indian Composition by Marsden Hartley. This work from 1914 is one in Hartley’s Amerika series, painted while the artist was living in Berlin. The paintings in the series explore Hartley’s relationship with both Germany and the United States and reveal his fascination with Native American culture—a fascination shared by many Europeans at the time. Though comprised of symbols that are in fact ambiguous, the painting’s bright colors, clear shapes, and graphic lines suggest a map’s functional requirement of legibility so that it resembles a sort of abstracted landscape that the viewer can explore.

Starting in the center of the painting, we encounter a repeating triangular shape, represented largely as tepees, all pointed towards the top of the painting. This motif draws our eye in one direction, similarly to a compass rose on a map, providing an orientation to the viewer. This guiding shape brings us to the yellow circle at the top of the white triangle, suggestive of a sun with golden rays emanating from the top. Surrounding this orb, another circle is filled in with white and blue squiggles, reminiscent of birds and waves, respectively. These symbols bring to mind the ocean, or a river, and the horizon, further accentuating the feeling of a landscape.

Along the left side of the canvas, a wavy black-and-red striped ribbon cuts vertically through the scene. The line seems to create lanes along a road, while an intersecting green wheel evokes navigation, distance, the cardinal directions. The circle shape repeats on the right side of the painting as a shield-like shape in concentric rings of red, yellow, and blue. The symbols within the shape read like a bordered message in hieroglyphs, reminding me of a map’s cartouche—an ornamental “container” for the map’s title, date, source of the information, and cartographer’s name, among other things. The middle part of the lower triangle contains stripes of black and white, with small squares spaced across them. Here, I see a map scale, indicating distance and connecting back to the actual space being drawn. The repeated triangle and circle motifs help to ground the viewer in this abstract space, aiding us in making sense of the overlapping shapes, colors, and patterns.

For me, this exercise of viewing Hartley’s work as a map has helped me see patterns in the work’s structure that I hadn’t perceived before. It has offered me a different approach to exploring Hartley’s paintings as his way of navigating his feelings about his native and adopted countries. And in the same way that a map can guide us through uncharted territory, a work of art like this one can guide us through complicated understandings of our own world.

My Friends at the Museum – Art that Speaks