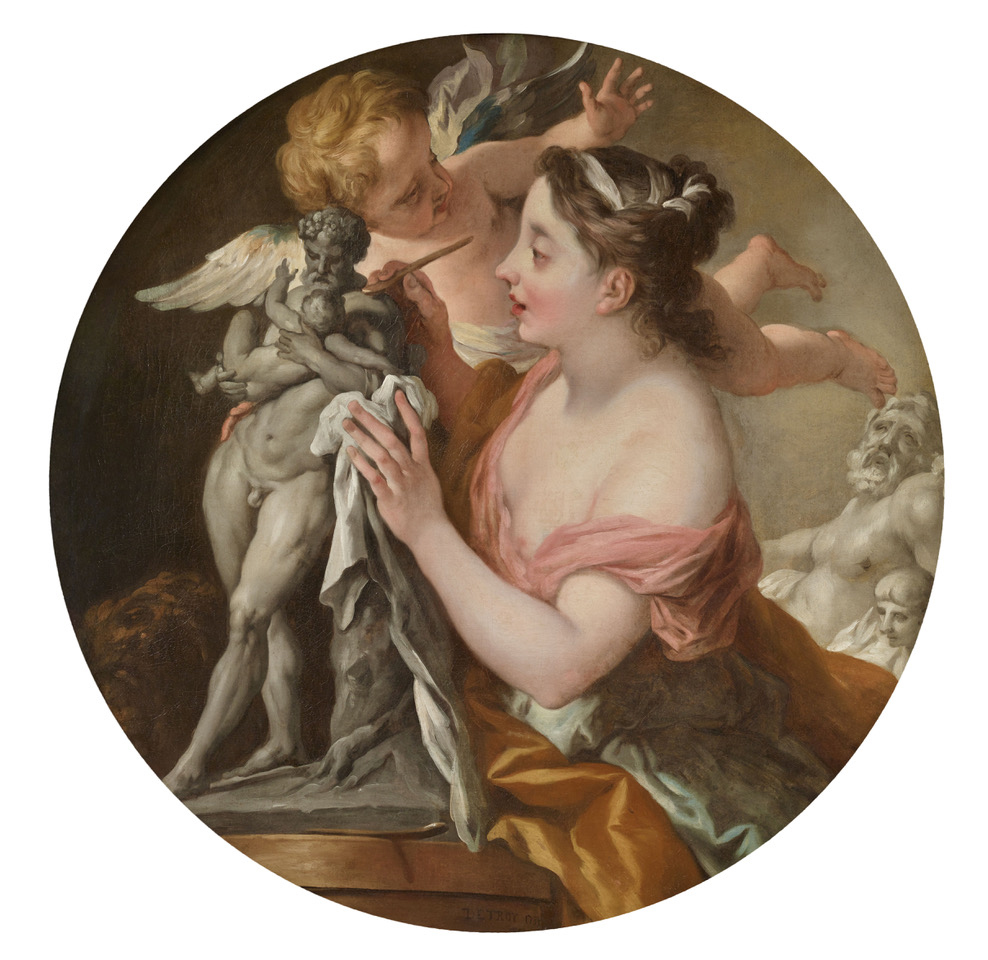 One of our most recent acquisitions at the Frances Lehman Loeb Art Center is an eighteenth-century painting by French artist Jean-François de Troy (1679-1752) titled Allegory of Sculpture. De Troy was the son of portraitist François de Troy, whose connections allowed his son to obtain a post at the French Academy of Rome and later return to the Royal Academy of Painting and Sculpture in France.

The painting depicts a delicate woman sculpting a version of the Roman statue Silenus and the Child Dionysus while a cupid-like figure hovers above the sculptor as if inspiring her or accompanying her in the process. In the background there are two more figures that look like Roman sculptures, which can indicate that the scene takes place in an artist’s studio. The gray of the sculptures and the background contrasts sharply with the lighter, pastel colors of the cupid and the woman, as if attempting to make a distinction between the living and the non-living–the creator and the created.

To some modern viewers, the work might seem “very ridiculous and extra,” as a visitor I was talking to described it. They are not completely off, given that this work belongs to the Rococo style, which developed in France during de Troy’s time. Rococo works were characterized by an abundance of ornamented detail and excessive use of curving that gave them a certain frivolity. Rococo artists would usually depict mythological themes that they attempted to express indirectly or subtly. Therefore, they often made use of allegory to illustrate a more abstract or complex idea through a simpler narrative.

In Allegory of Sculpture, for instance, the narrative references the process of Roman reproduction of Greek bronze statues, as well as the later reproduction of the Roman version during the seventeenth and eighteenth centuries after its discovery. Something particular about the work that resonates with the Vassar College spirit is that it actually belongs to a series of paintings by de Troy dedicated to, yes, the Liberal Arts.

The painting also works well where it’s installed, as it is surrounded by other eighteenth-century artworks that relate to the theme of sculpture. These include two actual busts from the end of the century and a portrait of English sculptor Anne Seymour Damer painted by George Romney in 1779. I have also included images of some of the paintings in de Troy’s Liberal Arts series so you can look at his other works and get a sense of his style.

Observatory Night at the Art Center

Connections: Three Men and a Photograph