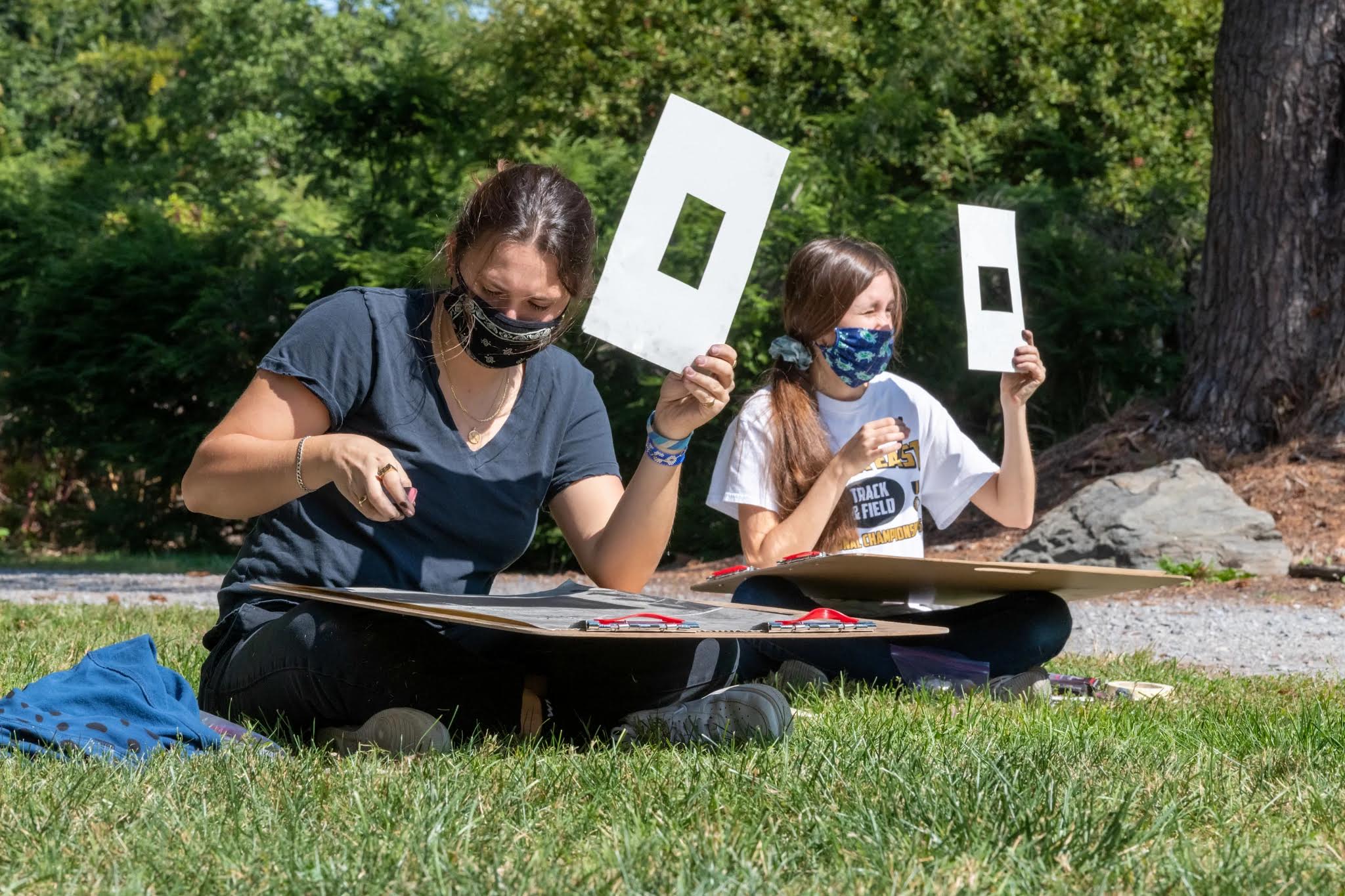 The following is an interview between Loeb Post-Baccalaureate Fellow Cassie Jain and Art Department professors Gina Ruggeri and Laura Newman.

By devising and implementing social distancing protocol and hybrid teaching programs, Vassar College was able to welcome students back to campus for the fall 2020 semester. However, campus life still looked far from normal. New challenges—including holding class in outdoor tents and teaching simultaneously to on-campus and remote students—demanded new approaches to teaching studio art courses. Gina Ruggeri, Laura Newman, and their colleague Joshua Marsh each taught sections of Drawing I, a yearlong introductory art course focusing on drawing elements and media. In this conversation, Ruggeri, Newman, and Jain discuss the ways in which hybrid teaching has changed the course and affected their pedagogical approaches.

Could you tell me a little about the format of the Drawing I class this past semester?
Laura Newman: One day a week we worked in a tent or somewhere else on campus, socially distanced wearing masks; one day a week we were remote. On the days we were remote, we introduced new projects and critiqued student work. Gina and Josh made extraordinary demos and we all made PowerPoint presentations of contemporary artists and Old Master artists, just tons and tons of drawings. On the days that we were in person, and actually most of the days that we were remote, we drew together. For instance, one time my students drew each other in spectator view on Zoom. Another day, Gina came up with a way of talking about gesture using socks, so everyone took different colored ballpoint pens and drew contour drawings of multiple socks.

It’s super fun to think about the possibilities of Zoom as a place to make art. It feels restrictive at first, like “oh I’m stuck in this teeny tiny box and everyone else I’m seeing is too,” but it’s also a portal into other worlds. For both teachers and art makers it’s interesting to think about what you can do on a screen.
Gina Ruggeri: I’m hoping to use these 3D scans of sculptures and that’s something I think could be a resource for teaching online. I mean, you could use that in the studio too, but the limitation of being on the computer, exactly to your point of “what can you do on there,” what you can’t do otherwise, is something that we’re playing with.

I think part of being on Zoom that I appreciated was the opportunity to do quick drawing exercises in the students’ own environments, like in their rooms or bedrooms. We did an exercise in the beginning where I had them fold up a paper—like if you knew how to do origami, great, but if not, then just a paper plane or a crumpled up ball—and then we did a bunch of drawings from those. The context kind of lends itself to exercises like that, where we’re coming up with things we probably wouldn’t have done otherwise.

It’s such a challenge, especially because it was relatively short notice that everyone had to shift to teaching like this, and I think social distancing is going to have to keep going for a while.
LN: In the spring, most students were at home, which often allowed them to work with more specific subject matter. Students drew their families and the contents of their refrigerators, and all sorts of subjects they wouldn’t have access to at school. This past semester, many students were back at Vassar, so instead of these personal environments, they were in their dorm rooms and maybe they were quarantined and some students were remote and some were on campus.

GR: Yeah, that was a totally new experience—having people who were actually there and people who were not actually there. What I eventually started to do was bring my iPad to the tent, and show my remote students the setup we were working from, and describe the exercise. They would then find a similar subject in their own location to draw from. It would never work to just point a camera at our still life and have them draw from that. So it became more of an adaptation.

Drawing is so much about space, how you understand it and want to translate it. When it becomes 2D, it’s kind of like the drawing has already been done, but in so many ways it’s taking away sensory details that we’re so used to having and relying on in order to make things.
GR: I think it’s really made me appreciate how much the students learn from each other working at the same time. When we work online, we’ll have them photograph their drawing and then upload it and talk about it. We tried a little bit of holding up the drawing to the camera, but that just doesn’t work very well.

That’s something I’ve been thinking about: How do you show art when not everybody’s together? How do you make online work and show it in a way that does justice, or make it as enjoyable as walking into an exhibition space?
LN: In my Painting II class, I asked each student to email an image of their work to another student, who then had to curate it into a show built around anything other than subject matter. I found it was helpful for them to think about various ways their work could be contextualized. We did a lot of things in the drawing class that were specifically digital. For example, in one project, faculty selected a series of paintings and drawings that we sorted into categories, like atmosphere, detail, and a range of formal ideas and then organized into folders. Students layered details from multiple images into collage-like drawings and some of the work was really quite interesting.

Next semester we deal a lot with the figure. Normally we would use many models, but we’ve been talking about other ways to include figures and that includes everything from self-portraits to working from a still from a movie. We’ve been talking about the drawings of the artist Dawn Clements, a wonderful young artist who died very recently and drew from movies.
I think, particularly now, students and all of us, appreciate doing something together as a community. And drawing can help you deal with, in an indirect but very deep way, difficult issues.

It’s such a time of upheaval. It’s nice to have something hands-on and it’s a reprieve to be able to make art.
LN: Yes—drawing provides access to the unconscious but at the same time is really rigorous. It’s really hard to convey how rigorous it is and at the same time serious fun, you can get outside of words and your troubles and get in touch with other parts of yourself.

GR: That’s true at any time, but especially now it’s feeling more poignant, and pertinent. And Cassie, it’s something you said—which is the idea of making something material of this experience. I do think the process, like Laura was saying, of making something and getting lost in it is something that’s physical and it is real, it’s not like something that just disappears into the ether. I feel like it’s important. There’s the reality and the object you create from your experience.
LN: And I’m noticing this in the art world too, as we’re nearing the end of this experience, there’s this sense of this being a memorable period. There have already been so many shows about pandemic art and the art of isolation and museums are collecting artifacts from this time.

Personally it’s such a weird thing to think about, because I want to move on—and not forget this time—but to not have to remember as much what it felt like living through this period of social distance and isolation. But at the same time I have these panics where I think “I should remember this,” both for myself and for others, to make a legacy of what it feels like to be living through this time. It’s so intense to live through on a day to day basis but you don’t think about how it’s going to live on once it’s safe to go outside and be with other people.
GR: I feel like we may have a renewed appreciation for school! You know, going to class and being in a real setting.
LN: We really miss materiality! 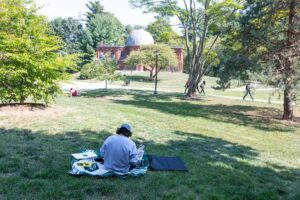 Yeah, Zoom is a great platform for being able to see people you’re not close to, but you miss so much. Even being able to see someone’s full body and learn their mannerisms is something I miss so much and, in terms of art classes, there’s so much to be missed in terms of sharing space and light.
LN: I’ve also been thinking a lot about how students teach each other. You have to make this transformation to be able to get and give so much visually online. It’s such a leap of trust.

How have students adapted to the current learning environment?
GR: I got a lot of responses saying, all things considered, they thought it went well. They appreciated the combination of in-person with online, but they’re very aware of the limitations. I think the hardest part was critique and being on “mute” and figuring out how to converse with each other.
LN: I’ve been having everyone in class unmute. A friend of mine had brought up this phrase of “collaborative overlap,” instead of interrupting, which I love.

Is there anything else you’d like to share about this experience?
Drawing 1 is a team-taught class and I would say that the pandemic forced us to work together and I’ve learned so much in the process.

GR: Yeah, I’m really grateful for my faculty community and dialogue for coming up with ideas. I feel like I learn so much more about teaching by talking about it with my friends and colleagues.

A Playlist for the Loeb

Cartography and Art: Artworks as Maps